Back again with another delicious & traditional french recipe. This one is one of my favorite french recipes which is (almost) 100% vegan on its own! (only thing that isn’t vegan in the original recipe is the butter and the broth). This recipe was one of my first recipes on tofucado and I felt a bit nostalgic at the beginning of 2021 so I’ve decided to make it again, but this time in video format and also, with my amazing Le creuset. So… here my traditional french onion soup!

As I mention in the video, making a french onion soup isn’t difficult, it just requires love & patience (since you will be cooking it for at least 1h).

Here the ingredients you will need:

For the grilled cheese toast

I live in France so naturally I have tried & eaten tons of french recipes and since I like the challenge I have adapted them to be vegan or vegetarian. This is why tofucado has sooo many french recipes. I will continue to grow this “collection” of french recipes in the future, but for now, if you want to check out more recipes (cooking & baking included), see the list below! 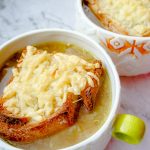 Liked this recipe? Pin it!

Hi, I’m Meri and I’m the person behind tofucado! I’m glad you found my little corner on the internet, filled with food and everything else I like.

Any cookies that may not be particularly necessary for the website to function and is used specifically to collect user personal data via analytics, ads, other embedded contents are termed as non-necessary cookies. It is mandatory to procure user consent prior to running these cookies on your website.